Cloud Automation in Windows with Terraform While CloudFormation remains the de-facto standard for implementing your AWS infrastructure as code, there are a litany of great solutions out there which provide new advantages, features, and Domain Specific Languages (DSL). These all aim to make the modern Cloud Engineer’s life easier. One such solution is Terraform cloud automation.

Terraform, developed by HashiCorp, takes a cloud-agnostic approach to deploying infrastructure, while implementing their own DSL called HashiCorp Configuration Language (HCL). The goal is to create a language as powerful as JSON, but easier to read for humans (like you and me!).

The Power and Flexibility of Terraform

Today we are going to tie this fascinating new language together with Windows automation. We will completely automate the deployment of SharePoint to a set of standard images, as provided by AWS.

We won’t be going over Terraform or AWS terminology from the ground up (HashiCorp already has an extensive library of documentation and guides for you to peruse). If you’ve never heard of Terraform, take a minute to familiarize yourself with the documentation to gain context to the automation and the syntax in the scripts before we dive in.

Terraform is composed of a logical set of 3 files: Variables, Template, and State. I use the term “logical” as the Variables and Template can be contained within each other or extrapolated out to several files.

Variables – Predefined variables that support lookup maps. This enables you to not only set your values without changing your infrastructure template, but allows you to create lookups that will pick values relative to other inputs. An example you’ll see later is that of region mapping for AMI’s; as AMI’s only exist within a region, we can populate the list of Windows Server 2012 AMI’s from each region, and our template will automatically select the correct one based upon our working region.

Template – The template file contains the actual template for your infrastructure. It issues all of the commands to the target infrastructure provider. You will notice some similarities to CloudFormation, and some dramatic differences (especially that it is easier to read!).

Now, on to the fun stuff: Let’s Automate!

*Please note that there are several files involved with this automation. They will be referenced in the following guide, and attached at the end.

Before we get started, let’s take a look at some of the more crafty functions and features we will be using.

Sequential script execution in Windows. As you will see, we will be shipping several payloads of scripts to the Windows instances for bootstrapping. The challenge here is for a single script to handle the following

a. Restart Windows
i. This one is easy:

b. Login Automatically
i. A little more work, but nothing crazy. This script utilizes the registry to tell Windows to restart, what credentials to use, and how many times to login automatically. All of these values are standard Registry Keys, making this a breeze with PowerShell.

c. Execute the next script after restart…my favorite. This will utilize the registry to tell Windows what script to execute after the next restart. The trick here is creating an entry on the ‘RunOnce’ directory, with a value referencing the full command to be run.

Due to the standard execution policy for PowerShell, we are using small batch scripts to call the next PS script without enforcing the existing Execution-Policy. This can be easily overridden by setting the Execution-Policy via a Provisioner in Terraform, but we are going to assume that the Execution Policy should be untouched. Therefore, we will leverage batch scripts to call our PowerShell scripts using the
–ExecutionPolicy Bypass flag. .bat scripts will all look like this:

I (and thousands of others) highly recommend you make heavy use of variables with Terraform to make future changes easier. This is conducive for modularity and hand-offs to other engineers.

1) Standard – a simple variable that maps to a single value:


2) Input – a variable with no predefined value, where the user is prompted for input upon execution. This is done by :

3) Variable Mapping – A set of values that are predicated by another value in the template.

These variable types will be used by our finished script.

Here we have the variables for accessing our resources. Since we are working with AWS we will use Access / Secret Keys, of which you can find instructions for generating here. These are hardcoded for simplicity, but you can set them as environment variables and the template will pick them up automatically.

This will be the password for the Windows Image once it is launched.

Here we declare our region as a standard variable.


Specify the AMI we want. This is an example of a mapped variable, where we select the AMI ID based upon our region.

Specify our Instance, Security Group, VPC, and Subnet Details. If you are creating or reusing existing resources, they can be listed here and referenced in our Template file.

This provides us a basic framework for reused values, which we can add to as we develop our infrastructure.

Here we define what our environment will look like. We will start seeing some the power of Terraform as we manipulate our environment, installing packages, features, etc.

Please note that some of the code is written inline, but can easily be abstracted to files for modularity.

Creation of our VPC.

Creation of the subnet. Note the VPC ID. We are referencing a resource that was just created. Terraform provides a lot of flexibility with this feature by allowing undefined resources to be referenced later. The variable name is simply ${RESOURCE_TYPE.NAME.ID}.

Now that we have a bit of the networking infrastructure, we will provison and AWS Internet Gateway (IGW) so that we can talk to the world. Note again that we are referencing resources being created in this same Template file. If you spend any time at all using Terraform this will become a very familiar practice!

Now that we have a connection to the world, we need to apply some rules. Below we create an aws route table, and attach it to the previously created gateway. For our example we are opening up to the world (0.0.0.0/0), but in a Prod environment your routes may be more complex.

Now we create a DNS resolver for a DHCP Options Set. This is a key step when working with Active Directory. Our servers in AWS naturally use the default routes, and have no idea that our soon to be provisioned AD server is an authoritative DNS. We must create this Option Set so that every instance in this group will know to use our specified IP’s as usable DNS servers. Otherwise the Domain join would fail and the SharePoint installation would come to a screeching halt!

Now we associate our previously created DHCP Option Set with our VPC. If we didn’t, the Option Set would be defined, but never applied!

Creation of the Security Groups and Rules. You may be wondering why we bothered with a Route table when we can control inbound/outbound traffic with Security Groups. The answer is the necessity of the DHCP Option Sets so our servers can route properly to the AD instance.

The following makes use of Powershell to set the administrator password at boot for any stock Windows Server AMI. This ‘data’ set can be passed into any subsequent EC2 resource definitions. Notice how the variable “var.admin_password” in the ‘vars’ block after the PowerShell script is defined? This was designated in our variables file, and was prompted for before any executions took place. This is a key feature as it allows your scripts to remain static while you change key values within them.

Finally, it’s time to create some instances! The remainder of the script is the creation of the aws_instance resources, and the manipulation required to ship and execute scripts on each node.

A very helpful “gotcha” below. If you know Windows, and especially if you live in a Linux world, you may have noticed that Windows tends to boot slowly. The Provisioner executing the sleep 60 is telling my local machine (Mac) to wait 60 seconds before executing the next resource. Windows has a habit of not being ready when you are upon boot, and this will prevent any time-outs for subsequent actions.

Now we get to the meat of things. We have a Windows server, but now what? Well, we need it to be a Domain Controller as required by SharePoint, so we will make it one! The following implementation is the foundation of installing packages on any windows machine via Terraform. We will ship files from the “activedirectory” directory on my local machine to the target instance using the “file” Provisioner.

Now, we will act on these scripts. Utilizing the “remote-exec” Provisioner, I tell the machine to execute the first script as user Administrator, using the password we previously set.

Remember the Preface? It is now manifested below, in the Provisioner “remote-exec”. The first script will run, which will kick of the subsequent restarts and scripts required to have a functional domain.

Here we will provision our EC2 instance to host our database server. Alas, we cannot use AWS RDS for this one, as SharePoint requires permissions that RDS does not grant. We will deploy Windows 2012 R2 instance that has SQL Server preinstalled, and configure it to our liking. As with the AD server, we will ship and execute PowerShell scripts to configure everything.

Note the designated Private IP. This is important, as we are going to be pointing our SharePoint server at this address later. Alternatively, we could take the generated IP as an output and pass it as a variable for the next resource. This second method can be seen when we deploy the SharePoint instance.

Another sleep, this time much longer to allow the AD components to be configured.

Once again copying scripts to our target for bootstrapping.

And now our final piece; the SharePoint Server. Much like the previous 2 instances, we are creating the resource, pausing a bit for it to get ready, and using a set of sequential scripts to install everything. There are a few extra items in play here:

…and more examples of advanced Terraform capabilities. Notice we are using an “echo” to push a Terraform variable into a text file on the instance. The ability to comingle the terraform syntax with our inline script allows us to move data around with ease. In our case, we will be echoing the Active Directory and Database IP addresses into these files. This allows us to use variables that are generated at resource creation on the actual OS. Very cool!

And that’s it! Easy right? While we did not demonstrate the ins and outs of the SharePoint scripts, we did accomplish our goal: Various methods that empower us to automate in a Windows environment with Terraform. How to automate While working with Windows can at times contain a lot of overhead, it can easily be managed with some powerful tools and a little bit of creativity. 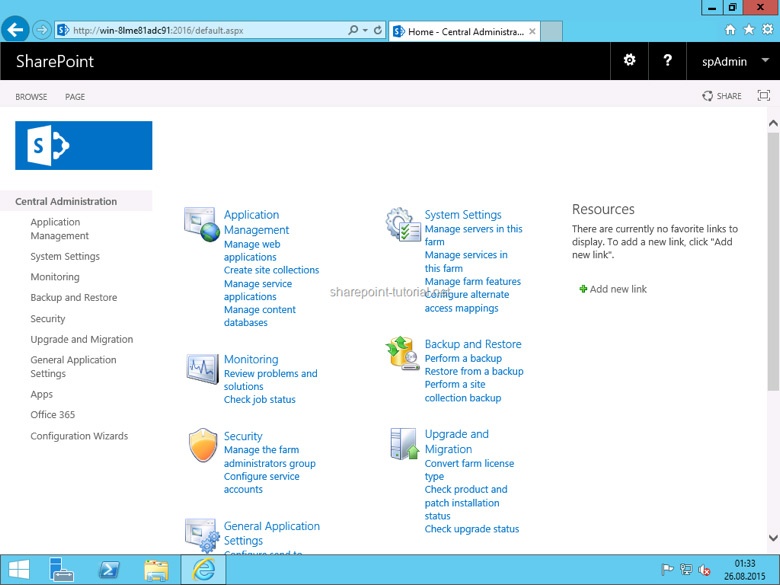 For reference, here are all the scripts used to install SharePoint, feel free to give it a whirl.

We strive to publish useful and informative blog topics, so be sure to provide feedback or suggestions and check back often! Modern Cloud Adoption Paths: Which One Is Right for You? AWS Announcements at a Glance: The Highlights from AWS in July 2020