The cost of moving data center infrastructure to the Amazon Web Services (AWS) cloud depends on a dizzying array of variables. First, there are more than 50 “instances” or virtual machines to choose from. These are the computing resources you will be renting from AWS, and the options come in the forms of computational power, memory, storage, locations and more. The type of instance you use, where you use it, and the amount of time you use it, will determine the bulk of your monthly spend with AWS. 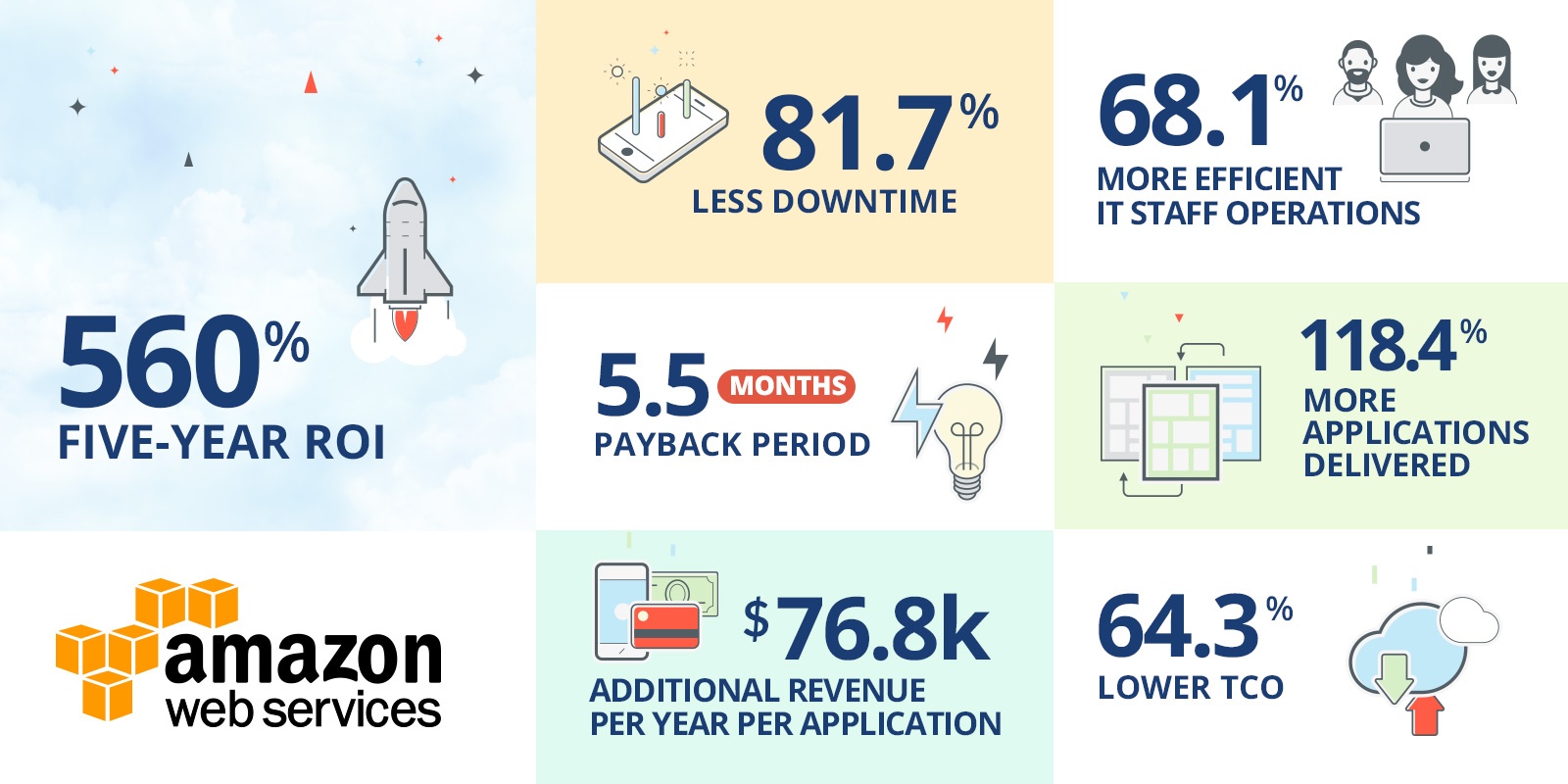 Comparing these costs to traditional internal data center expenses is not always an apples to apples comparison. AWS offers a host of packaged services for application development, load balancing, content delivery, storage, and performance enhancements that can improve business operations and productivity that are difficult to measure against an internal IT teams resources and output.

In 2015, market research firm IDC undertook a study of 10 companies from a cross section of industries that had shifted to the AWS cloud infrastructure to specifically measure how AWS impacts key business metrics. At a high level, the findings were extremely positive: “On average, IDC calculates that these Amazon customers will capture five-year business benefits worth over $1.5 million per application they are running in the AWS environment, and earn a return on their investment in AWS of 560 percent.” The total cost of ownership for AWS proved to be some 64 percent lower.

The organizations studied for the report had an average of more than 4,000 employees including more than 250 IT staff, 360,000 customers and were using more than 1,300 AWS virtual machines (instances). The companies had used a mix of on-premises, mixed on-premises and hosted, and hosted solutions prior to migrating to AWS.

The two primary benefits that IDC found AWS customers enjoy are 1) faster and more efficient application development, management and support; and 2) an improved ability to respond to customer needs and assist customers with their own digital transformations.

At the highest level, the study found that companies using the AWS cloud were able to reduce their total cost of ownership (TCO) per application by an average of 64 percent over a five-year life cycle by moving from on-premises, mixed on-premise and hosted, and hosted solutions to AWS cloud services. Data center hosting and infrastructure costs, as well as IT staff costs, were cut by an average of 64 percent. The cost of unplanned downtime on productivity was reduced by 82 percent.

The following were the major sources of productivity gains and cost savings:

How is Total Cost of Ownership Calculated?

TCO is a financial estimate that helps enterprise managers determine both direct and indirect costs of a product or system, such as AWS. This management accounting concept can be used to understand the big, long-term picture of exactly how much AWS will cost (or more accurately, save) your organization. Considerations for TCO extend beyond just the initial purchase price or implementation costs and account for the full cost of an asset over its life, which aren’t always reflected in upfront pricing.

Components of Total Cost for Technology

One of the main components to the total cost is the upfront pricing of a new technology. AWS offers two main pricing models: Compute Resources and Data Storage and Transfer. Beyond these two most popular options, are other pricing models such as monthly targeted audience (MTA) pricing, events collected pricing, messages sent pricing, and request pricing. They even offer some AWS service for free. You can check out the full details for all AWS products and upfront costs on the AWS pricing page.

The AWS customers studied were able to retire an average of 372 servers each. They also avoided the cost of scaling data center environments to support business growth. The companies estimated a savings of 65 percent on data center costs for hardware alone–including hosting costs.

As a result of these business process improvements, the organizations studied gained approximately $63M each. The estimated investment to migrate to the AWS cloud was about $10M, making the overall Return on Investment (ROI) for each company 560 percent.

Keep in mind that AWS has lowered prices more than 50 times since its launch in 2006 and continues to do so, making it one of the few utilities in the world that actually gets less expensive over time. Reducing AWS costs while the costs of energy, real estate, labor and hardware associated with data centers have likely risen would suggest that the ROI numbers are likely even better today.

AWS helps you reduce TCO by providing a pay-as-you-go model so you can invest only in the capacity you need, rather than having to invest in large capital expenditures.

To get an idea of the total cost of ownership for your infrastructure, Amazon offers an AWS TCO Calculator. To use it, you have to know your existing data center infrastructure costs pretty well. Once you describe your existing or planned on-premises or hosting infrastructure, you get an instant summary report which shows you a 3-year TCO comparison by cost categories. Then, you can download a full report including detailed cost breakdowns with the methodology, assumptions, and other background information that can be shared among other stakeholders.

AWS Announcements at a Glance: The Highlights from AWS in September 2020